Evil filtered through the bodies of corrupted man, tendrils of dark energies masquerading as light clinging onto the well-known corporations, the governmental bodies directing them to do the bidding of ancient inter-dimensional Gods.  Against these forces, a man trained by the old ways of powerful earthy witchcraft and the modern combat techniques of the territorial soldier.  His beast like mask striking terror on the agents of the seemingly human agents of these elder cthulhu – like Gods.  He is murderer, Assassin and protector of humanities free-will. 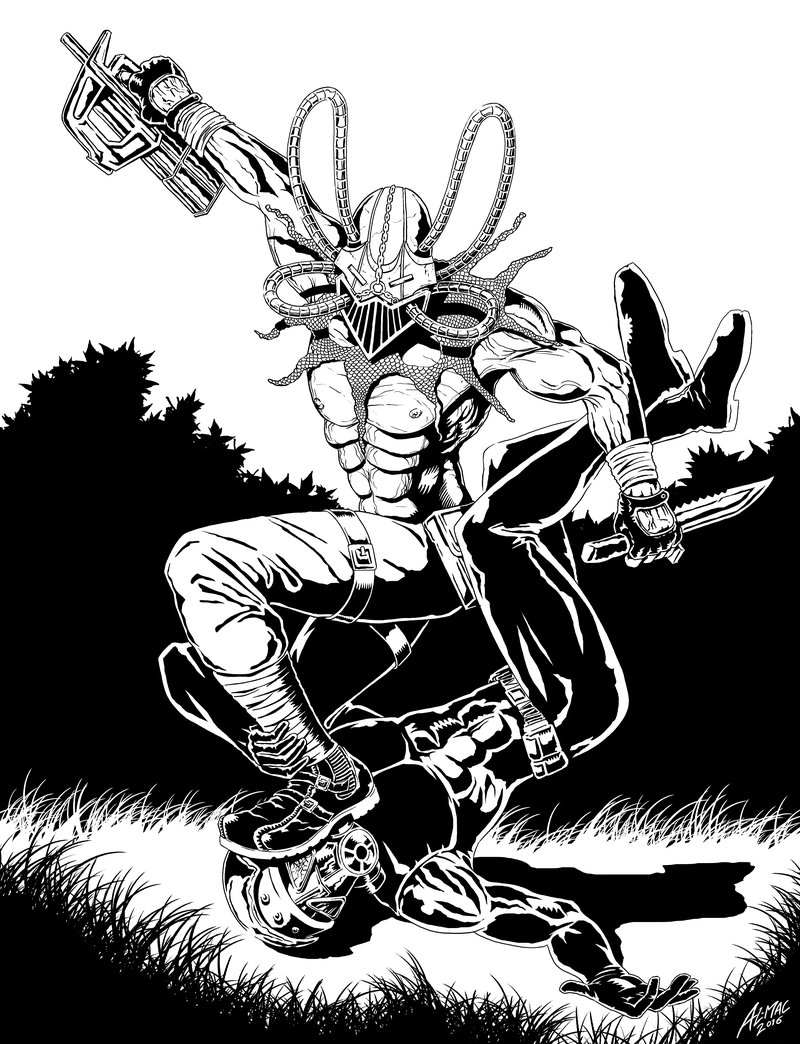 There have been many characters in the annals of the 40 years of 2000AD which have stood out, one of the most memorable of these is Finn, a character infused with imagination, esoteric power and righteous fury.  Created by long time comic scribe Pat Mills, Finn originally appeared in the fortnightly magazine in the UK called Crisis.  Crisis continued the edgy, darkly satirical focus of 2000AD and it broke the mould of British Comics, being not only creator owned but also tackling issues such as Social Struggle, Politics, Racism, Poverty and Sexual Politics.

It was in Crisis that Finn was introduced as a supporting character in the comic strip Third World War. Known only by his first name – Paul, he was a former solider in the British Army stationed in Northern Ireland.  He deserted, tired of the sectarian violence endlessly spilling out onto the streets and became an ‘eco-warrior’, fighting to save the world from corporations and the influence of corrupt politicians. During these fights he began to see that the leaders of these corporations were in fact powerful aliens, amphibious – like creatures known as Newts. They enslave humanity and use them like cattle.  For a select few members of humanity, they are gifted with some of the powers of their masters to help control the populace and sometimes just to torment their fellow man.  They are called ‘The Shining Ones’

Finn is trained by a High Priestess of the Magickal arts – the mysterious Mandy, who brings out his bestial side, this is the element of humanity which the Newts wish to suppress – they are terrified of the raw animal power locked within mankind and so throughout successive generations teach humanity to suppress it.  It is through this power that Paul becomes Finn. Finn fights the Alien menace by Night, but is a Taxi Driver by day – this is one of Pat Mill’s singular motifs, the ‘working -class hero’, not the Billionaire with unlimited resources, not the superhuman alien with God like powers but the ordinary individual who by virtue of a personal cause or a calling which resonates deeply with their own sense of humanity -as with Finn – becomes a heroic figure.  Throughout the comic there are humorous allusions to Finn’s day job, intermixed with the plot of a cosmic threat and high stakes missions to assassinate Shining Ones, we have Sadie – the Taxi Cab radio controller asking Paul to go and do routine pickups. This is one of Pat’s great gifts as a writer – he doesn’t let the overarching plot get too heavy and doom laden for the reader, the injection of surreal humour raises a laugh and is in itself a fairly subversive method of story narration.

Finn confronts the shining ones using a mixture of powerful arcane magick and twin uzi’s – there’s an incredible amount of research which has been carried out regarding the nature of the magickal weapons and these are used to great effect, allowing Finn to dispatch these incredibly powerful foes in a variety of ingenious ways.  Giving the hero extremely powerful antagonists sets up the dramatic tension and draws the reader into the battles unsure of the outcome. Finn has never been a collected volume and there is increasing pressure for Rebellion to bring together both volumes of the narrative and also for further adventures of our favourite eco-warrior.  The premise intrigues and draws the reader into the world-view quickly, there is character development through pacy action based dialogue and a hero who is tough, has amazing character design and fallible.

Finn was cancelled as 2000AD Publishers believed he was very similar to another popular character from Pat Mill’s copious catalogue of memorable dramatis personae – Slaine.  I, like Pat would challenge this, they are thematically similar and contextually different, reading through Finn Volume one and returning to Slaine in his first outing “Warriors Dawn” there is a definitely a different resonance present with regards to each character.

Chris: Hi Pat, thanks for taking the time to answer a few questions about a narrative which quickly became one of my favourites.  What were your inspirations on writing the character?

Pat Mills: Finn was a key character in Third World War in Crisis. It quickly became the most popular and so it began as a separate fantasy series in 2000AD. He was based on real people: an eco-saboteur and a pagan witch. Because it rings true, it had great appeal to the readers. In fact it was more popular than Slaine with whom he is often compared.

Chris: Finn quickly became a favourite of mine, has there been a strong fan reaction for a collection to be released by rebellion?

Pat Mills: Fans have asked for the series to be collected. So far, no response from Rebellion. Trying to find out why is like trying to get a straight answer out of a politician. Impossible. It thus leads me to conclude there’s some covert reason why this is so and I speculate on this in my book “Be Pure”.

[Pat has written an extensive history of 2000AD entitled Be Pure, Be Vigilant – The Secret History of 2000AD – https://www.amazon.co.uk/Be-Pure-Vigilant-Behave-History-ebook/dp/B072JYY2NF] 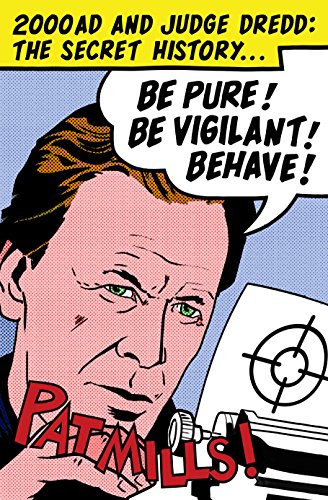 Chris: There’s a reoccurring theme which is strongly marked in Finn – the evil of corporations typified by the “shining ones” is this the main motif (muse) of your work?

Pat Mills: Trans-National corporations are clearly a negative force on society. There’s no question of that, so they make for good villains with endless potential. There’s also an esoteric aspect . Why make up esoteric bad guys when there are real ones out there – the Shining Ones.

Chris:  Finn sets himself apart as a character in a world of comic book heroes in a few interesting ways, he’s a cabbie, former soldier and “working class” he also abdicates ultimate power at the end of volume 2 – citing that he’s not a superhero – do you think those reasons make the series so enduring and resonating in an industry awash with “superheroes” defined by their powers ?

Pat Mills: Much of his appeal is that he’s “true to himself”. Far too many heroes in fiction and comics are middle class and upper class. Few are working class, whom the readers can identify with. I think this is deliberate and regrettable.

A Massive thanks to Pat for taking the time to answer these questions. 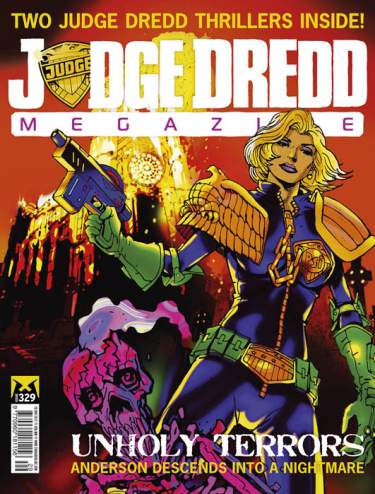