The first game genre that really gripped me was the Side Scrolling shoot ’em up or more commonly known as the ‘Run N’ Gun’. Containing elements of shoot ’em ups and platformers. They can contain contemporary or futuristic themes but wherever and whenever they are set they are all about blowing sh**t up and taking names. Playing through these titles I am reminded of the wonderful over the top 80’s action movies I have so many fond memories of.

Here’s my personal list of the top ten games in this fast paced and powerful genre.

One of the original top down run n’ gun titles, Ikari Warriors is an all time classic.  After crash landing your plane behind enemy lines you have to fight your way up the scrolling jungle of enemy soldiers.  Taking weapons and also jumping on board vehicles to aid your escape.  The game is clearly inspired by the Rambo films, with player 1’s character looking almost like Stallone (player 2 was the same but wearing a blue bandana).  It’s an arcade smash that was ported to most home machines of the time.  However the rotating joystick controls made it difficult to replicate the exact nature of the action.

Earthworm Jim is without a doubt the funniest game on the list.  It has an abundance of shooting and platforming action with a unique style of humour.  One of the beloved trademarks of this title is the attention to detail given to the animation.  It’s slick and stylish and even features catapulting cows! At it’s core lies great gameplay and tight platforming mechanics.  The development team at Shiny also crafted new graphic techniques during this games development that no one else was using.

If you don’t know what a typical run n’ gun game looks like, you obviously haven’t played any of SNK’s Metal Slug games. I couldn’t pick just one of these titles to showcase as each of them simply excel as exemplifications of the genre. The Metal Slug series is one of the crowning jewels of SNK’s legendary Neo Geo system and features some of the most detailed pixel art ever. However it’s the high energy, highly explosive and tongue in-cheek gameplay which makes this series a beloved classic.

In the 90’s Midway were the kings of the over-the-top parent shocking video games, from the visceral digitised action of Mortal Kombat to the worship of the cathode ray tube and total disregard for human life that was Smash TV.  Released in 1992, Total Carnage shares a lot in common with Smash TV.  As the name suggests, this is probably the craziest game on this list. A delight for anyone who enjoyed the antics of Willis, Van Damme and Arnie in action.

Capcom’s 1985 Commando was one of the earliest examples of vertically scrolling run n’ gun games, predating Ikari Warriors by a year.  I must confess that I loved it’s 1990’s hectic sequel.  This game looks incredible featuring clean yet detailed pixel art that reminds me of the Bitmap Brothers games.  Mercs was easier to translate to the home systems due to the fact that it doesn’t require any specialised controls. 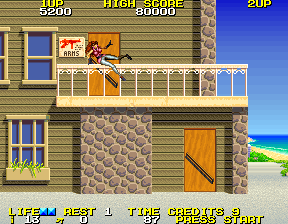 Namco’s Rolling Thunder series oozes style, the original had super smooth and detailed animation to go along with it’s great gameplay and atmosphere. The sequels added more locations, improved graphics and the ability for two-player co-op mode. The sequels were also some of the few games that put player 1 in the control of a female protagonist.

I have particularly fond memories of Alien Syndrome, my first encounter of this title wasn’t in the arcades but on the humble Sega Master System conversion. Featuring clean graphics and projecting a sense of foreboding and dread which film fans would have been familiar with through the Sigourney Weaver movies.

The game also evoked that other sci-fi horror masterpiece, The Thing with it’s hideously undulating monstrosities that you have to blast into oblivion. Unlike the other games in this list, the maze-like structure of the levels of the game force players to explore and the time bomb ticking down in the background only added to the sense of dread.

Characters that looked like Arnie and Stallone? Loads of big crazy guns? Soldiers, robots and aliens to blast? What was not to like about Contra – or Gryzor as I knew it through the home system conversions.  I was truly terrible at this game and took comfort that it was known generally as one of the hardest games of the era.  There’s imaginative enemies, environments and mighty big bosses to beat. The action was fast and frantic and the platforming elements required some pixel perfect jumping skills. This is justifiably seen as one of the best shoot ’em ups ever made.